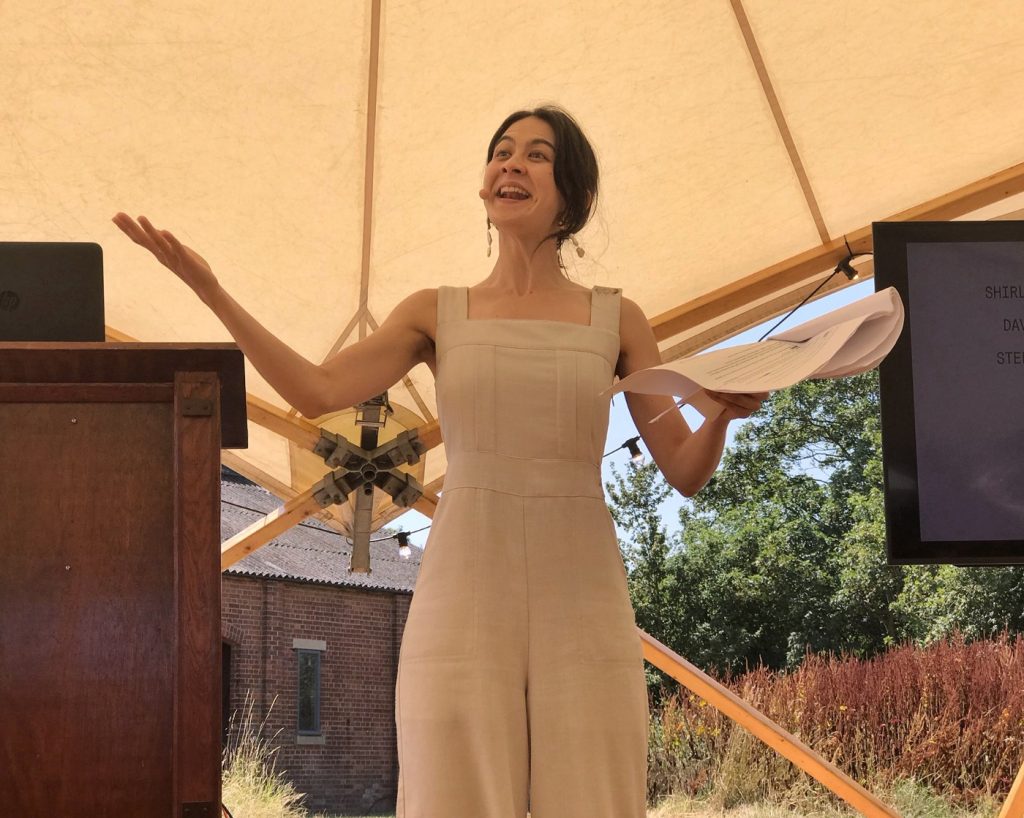 Talking about her performance piece Say Something Bunny, the interdisciplinary artist Alison S M Kobayashi showed how there are ways of getting at human truth that aren’t journalistic or driven by dats. “The objects I’m interested in are found and forgotten objects,” she says. “They can capture lived experience in a different way to something like a diary.”

For the last seven years she’s been working with a pair of found recordings that came with an antique wire recorder — an old technology whose heyday was in the late 1940s and early 1950s, and which records sounds onto wires as thin as a human hair. Her method is “deep listening”: she’s gone through the crackly, hard to decipher recordings (a dinner party with neighbours in surburban Long Island in the early 1950s, as she went on to discover) hundreds of times; not only making a 93-page transcript but researching every background detail she could find to give them cultural context.

A great breakthrough came, for instance, when (knowing from the conversation that one of the recordings was a wedding anniversary, and hearing a football game in the background) she was able to date the tape to Thanksgiving, and — searching through 32155 documents of couples who got married on Thanksgiving — eventually find the speakers and give them names and social security numbers and historical lives: “That was the pivot — when what had been a fiction project turned into something else.”

The performance, though, isn’t at all the approach a historian would take. She gathers 25 audience members around a table and “casts” each one at random as one of the speakers on the tapes. They don’t have to say anything — just listen, and follow the transcript — but that casting tunes them in: “It gives me joy every time when the audience member I’ve cast as Peppy [the parakeet] gets their first line [a cheep]. Most of the audience miss it but the cast member is listening out.”

And as they listen to the recording and read the transcripts, Alison pauses it to open up some of the details — the original recording of a popular song that one of the characters sings; the 1951 parody that another picks up; the definition of a yiddish insult (“alter kucker”) that one joshes another with. And it’s full of felicities — the grandfather Sam, for instance, who sings Yankee Doodle Dandy (“I’m a real live nephew of my Uncle Sam/ Born on the Fourth of July”), really was born on the Fourth of July. Here’s his birth certificate from 1886.

Here, assembled from layer on layer of chance and trivia, is a family kibitzing together one random afternoon a lifetime ago given threads of connection — cultural and human ephemera saved from oblivion. It seems apt in some ways that the recording itself turns out to be a palimpsest. As Alison explained the wire recorder — just to make things even more difficult! — was broken: a previous recording of an episode of the radio show Our Miss Brooks, imperfectly erased, runs underneath the voices of the families. Alison flew to California to track down that recording so she could include it in the transcript.

As Alison says, it’s not a “fiction project” but nor is it “nonfiction”. A journalist would go from research to source to story — find the surviving family member, Larry, 13 on the recording, and interview him to supply the finished project. For Alison, Larry’s contribution (she found him: he told her (affectionately) “You’re a sick woman.”) is just another layer in the weave, and his corrections are an epilogue rather than affecting the finished piece. But for the record, Patsy was a Boston Terrier not a cocker spaniel.

For Alison the audience is key: without images or photographs to go on, each audience member constructs the story with their imagination, from the voices and from their own experiences. As she says of a colleague who couldn’t bring themselves to delete a voicemail from their late father from their phone: “Listening to sound can bring a loved one back to life.”

1) There’s an incredible richness of human detail to be found in the things that history forgets — if you’re prepared to work hard, and dig deeply enough.

2) “Give the audience some work. It’s not doing anyone a service to dumb things down.”

3) You have to find laughter and joy in what you’re doing if you want to sustain a long project. “I couldn’t have done this project if I didn’t get joy from the recording. I’ve listened to this recording hundreds and hundreds of times, and it still makes me laugh.”