HOME > Uncategorised > Under the Wire 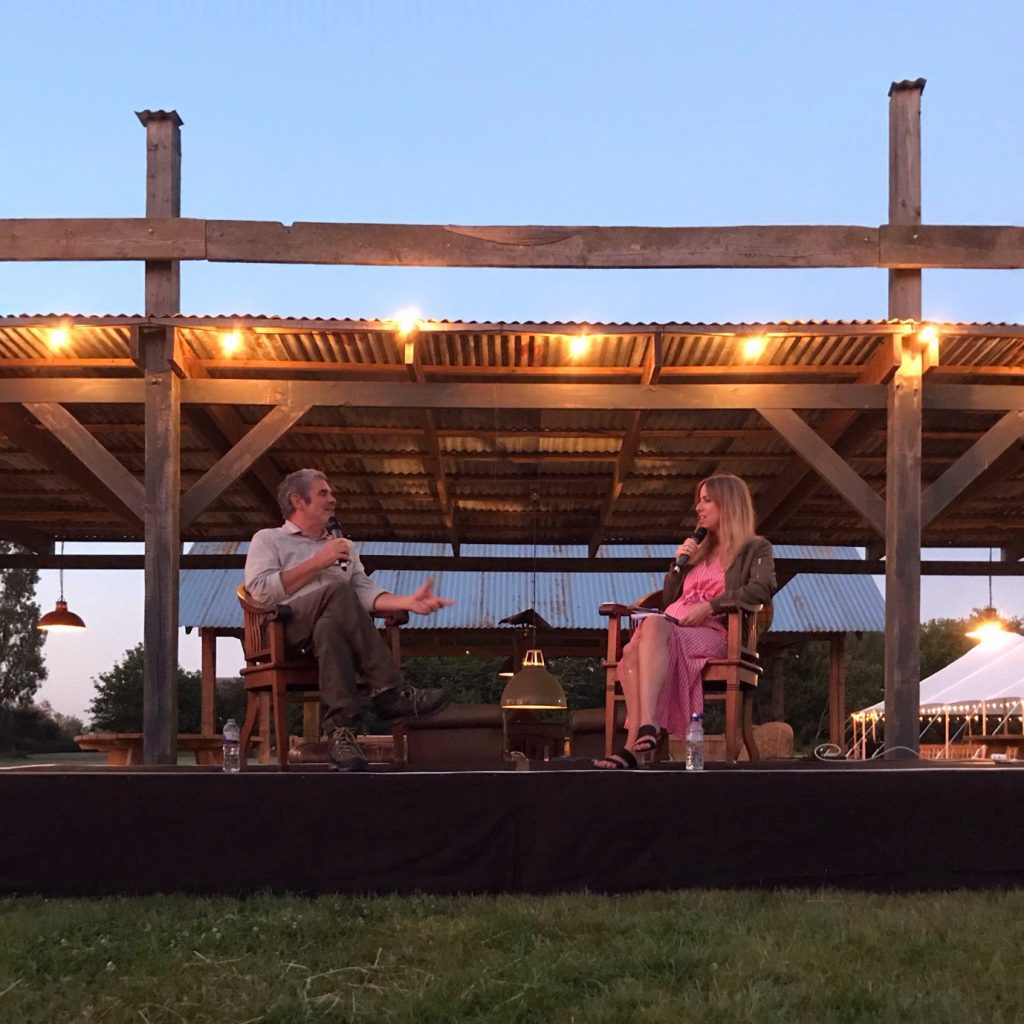 As the sun set on the first day of OffGrid, the war photographer Paul Conroy — author of Under The Wire — delivered what OffGrid veterans agreed was the most remarkable session the festival has seen in its four years — and gave us, in the process, a real sense of what it can cost, in the real world, to bring us something so abstract but vital as truth. Paul was the photographer who worked alongside Marie Colvin in the besieged Syrian town of Homs — and was blown up in the 2012 mortar bombardment that claimed her life. His talk, in conversation with the documentarian Catrin Nye, may have been serious but it was anything but solemn.

Paul came to war reportage, indirectly, from the army. “I was the world’s worst soldier. When I was leaving the CO asked me: ‘Conroy, what are you going to do when you leave the army?’ I said: ‘Cartwheels.’ He said: ‘Get him out of here, Sergeant Major.’” It was on a trip to the Balkans — a week that turned into six months — that Paul started to report. As he talked to refugees pouring across the border, he says, “I’d trained for war — I’d learned the weapons and the tactics and the methods — but this was the first time I’d seen the results. These people never talked among themselves about what they’d been through because it had happened to all of them: but when they met you, they wanted to trust you with their stories, to make those stories feel like they mattered to the world.”

Paul was in the bar of the Petroleum Hotel (“It was just like it sounds”) near the Syria-Iraq border in the build-up to the second Gulf War when he first met Marie Colvin. He was in disgrace, having — mad with boredom at the impossibility of getting permission to cross into Iraq to be on the ground for the bombardment — been caught by the Syrian army trying to cross the Tigris illegally in a home-made boat (literally; “I even made lifejackets out of Coke bottles: safety first!”). Colvin walked into the bar: “Who — and where — is Boat Man?” She stuck out her hand: “Marie Colvin. Sunday Times. Boat Man: I like your style.” They started drinking whisky together and a fast friendship — and close working relationship — began.

That friendship ended with Colvin’s death in a bombardment in Homs — a city under siege that every other foreign correspondent had refused to even try to enter. Colvin had simply said: “It’s what we do.” Getting there involved a hair-raising journey through literal minefields, sneaking past Syrian government forces so close they could hear them talking and down a 3km tunnel. “It was like getting out into Hell,” Paul said. “After Libya we thought we’d seen the worst the world had to offer. But that place was just being blown to pieces. 28,000 people in an area half the size of this island surrounded by a whole mechanical division throwing every weapon at it that they had. We tried counting impacts and lost count at forty per minute. The place looked completely uninhabited, but at night — at one in the morning — you’d see the ghostly faces of people sneaking out onto the streets, scavenging for food.”

It was this scene — where hundreds of widows and orphans cowered in one of two remaining cellars; where a baby died from shrapnel wounds, as described in Marie Colvin’s last report — that they reported from. And to which they returned when they were pulled out by their editors ahead of a final invasion and the invasion didn’t happen — “we turned off our phones and went back in”. He knew they were in trouble when mortar shells fell on either side of them: “I knew what was happening. I knew the tactic. It’s called ‘bracketing’ — they walk the shells in towards you. I knew we had about thirty seconds.”

He landed on the bodies of Colvin and another reporter. He was close enough to confirm she was dead. “I felt guilty because I felt nothing: they were dead and I had not to be dead.” Amid all the horror Paul described the humour that survives even in a warzone. Finding a hole in his leg that he could put his hand through he says his first thought was: “Oh no. Hospital food.” He saved his own life by tying a bright yellow ethernet cable he found in the rubble around the artery in his blown-up leg as a tourniquet: “most useful thing I’ve ever done with an ethernet cable.”

And the description of what followed was extraordinary — having his wound cleaned with a toothbrush and closed with an office stapler; sitting without painkillers in a room for five days listening to the mortars coming down outside — “The constant, constant bombardment — the building’s falling apart around you. Any one of them — any one — could be the last one you hear.” Eventual flight in a convoy of pick-up trucks through government lines: “23 of us set off — only seven of us made it.”

When he reached the mouth of the tunnel that would take him back out of Homs, he says, he found it filled with women and children. He didn’t want to go back before them, but he gave in to the argument that if he didn’t, if he didn’t tell the story, the losses would have been for nothing. Shortly after he got clear the tunnel was destroyed by government forces.

“I told them: ‘I promise I will tell your story. And I will keep telling your story.’ That’s why I’m here. And it’s still going on. The same thing is happening in Idlib. I’m not talking about history. This has never stopped.”

1) Paul, a Scouser, was told that it was good he got blown up in Homs because “Homs is the Liverpool of Syria.” Asked by an audience member who — apart from his job — he really thinks he is, Paul said: “Steven Gerrard.”

2) However dangerous it is, we need people like Conroy and Colvin reporting. Despite what he saw and what he lost, he said he was glad to have gone there: “I’d go back again.” As Paul put it: “There is nothing these people like more than to operate in the dark.”