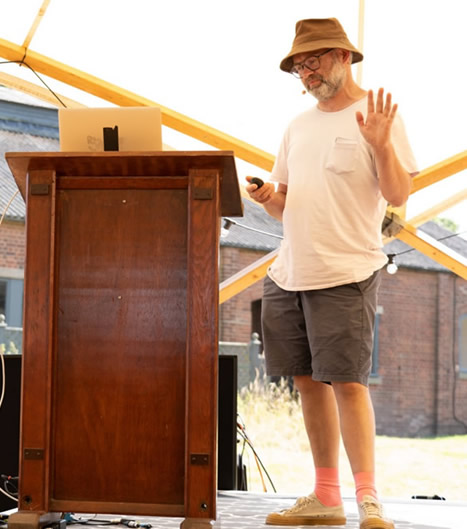 It’s a bit of a challenge to write up the excellent session with which Wilfrid Wood closed out the formal part of this year’s OffGrid Sessions — mostly, because so much of what made it so entertaining was so visual. Here was a Gillray parade of notables including Angela Merkel, Ronaldo, Prince William, Brian May, Matt Lucas and Melania Trump. Plus, of course, our new Prime Minister: “Made himself. Just a blob of pink Plasticine with some yellow slapped on top and there he was”).

So I could start by directing you to check out his work on @wilfridwoodsculptor on Instagram. I won’t give you a link to Grindr but he had a funny little riff on the phase during which he used the gay hookup app to find life models, in the process of which he also found a boyfriend… and had to stop using Grindr to find life models.

Wilfrid is an artist from a family of artists — his father was a natural history illustrator who did a lot of frogs and toads — and described making his early work with a set of “mini-DIY tools” his grandmother gave him as a child. He stared for hours at ethnographic portraits of people of different races, adored the work of Hockney and Francis Bacon (“not just his painting: his face”). Even as he went on to do a course in graphic design, he was fascinated by drawing faces.

He quoted a range of wisdom on the compelling nature of the human face, starting with a Victor Hugo quote he found on the front of an Aesop bag: “The flesh is the surface of the unknown.” Wilfrid broods on that: if you passed Jeffrey Dahmer on the street, would he just look like a normal bloke? That pilot who crashed an airliner into the Alps: “The moment they got a photo of his face it went on the front page. You want to see the face of the bomber or the killer or the pilot who lost his head.”

Simon Schama described how that portraiture was one of the most basic and powerful of all art forms. Princeton University researchers discovered we form an impression of a person based on no more than ten seconds looking at their face — “a mere TInder-swipe”. That question of what a face conceals or reveals was one that Plotinus worried about too: he thought that a face was a husk, and a portrait a husk of a husk — a double-illusion.

It’s maybe appropriate, then, that the satirical puppet show Spitting Image— with its latex grotesques of politicians — “saved my life” — rescuing him as a young man “from a boring job in publishing” to take an apprentice role on the show, making lots of eyeballs, animals and blinking devices (the only head he actually sculpted on the show was Rolf Harris, oddly). That physicality has stayed with him in his artistic practice: “I don’t use computers. I’m very hands-on. I like making a mess: airbrushes, scalpels, paint and Plasticine.”

What Wilfrid calls the “greyscale” area between photorealistic representation and outright caricature is the one he patrols. He aims to use slight distortions to bring out his subjects’ characters. He’s interested in the weird and crosspatch, in expressive truth and even in bad portraiture — which he has a sort of fascination with. He showed us some slides of outsider and non-taught art he likes, too — including that of an American gravedigger who makes his sculptures out of mud and adorns them with real spectacles and teeth from corpses. He says “Usually it’s non-art people who come out with the most interesting sculptures”, and quotes (the other) Francis Bacon: “There’s no excellent beauty that hath not some strangeness train the proportion.”

Accordingly, he says, he’s always on the lookout for fresh subjects. The Hackney Wick locals who volunteer are usually nice-looking but a bit too young, good-looking and symmetrical for his liking. And though just stepping onto the 38 bus, he says, furnishes a whole gallery of likely prospects, he thinks it might seem a “bit creepy” to approach strangers.

“I need some oldies and some more wonkies,” he said. Spread the word.

1) “People don’t want to look odd or funny. They usually want to look good-looking or even sexy. That is not always possible.”

2) Instagram is a great showcase for artists who work on their own: “It’s a free, online, very democratic gallery. It’s amazing for someone like me.”

3) Even if a piece of your work just moulders on a shelf in your studio, it’s all practice for something else.