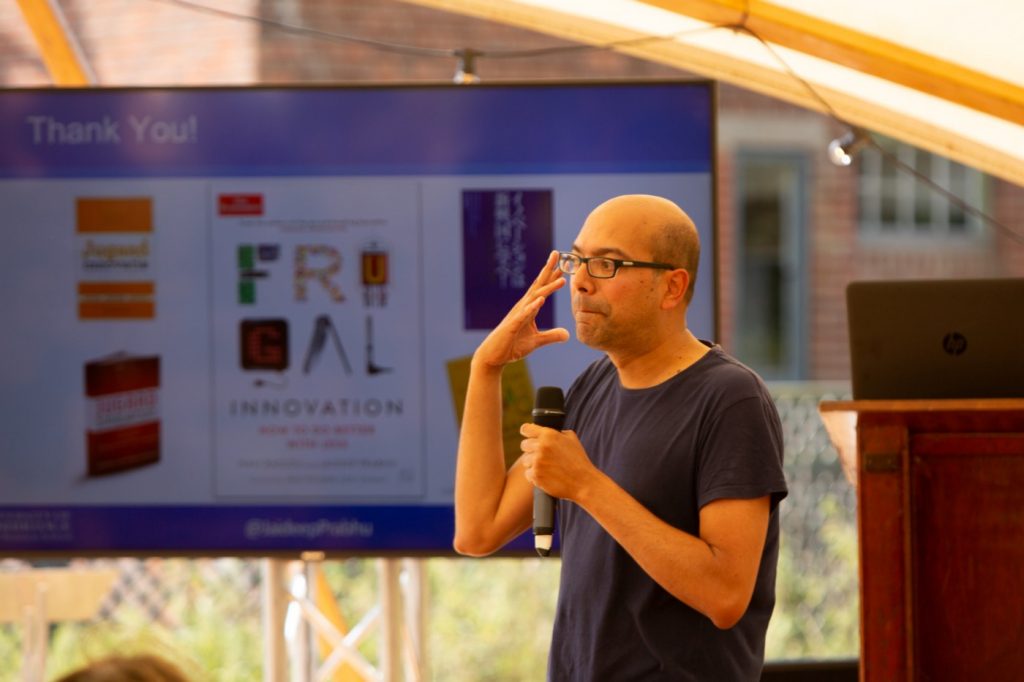 “Jugaad” is the Indian word that Jaideep Prabhu borrows to describe a particular type of innovation. “I defined it to mean: “The art of overcoming harsh constraints by improvising a flexible solution — not a perfect solution, but a good enough solution.”

A high-end fridge in the West can cost $2000 or $3000; but here, for instance, is Mansukh Bhai’s $30 clay fridge cooled by a pot of water on top. It was inspired by a photograph of a broken pot in the aftermath of an earthquake captioned: “Poor Man’s Fridge Broken.”

Jaideep spent the first half of an academic career studying innovation by focusing on large Western companies, where common wisdom holds that most innovation is done. But when he turned to developing countries, he discovered that innovation happened completely differently there. They were 1) frugal, 2) flexible and 3) designed to bring people outside the formal economy into it.

That’s a huge untapped market. In India 40 per cent of people are outside the formal economy, with no access to banks, little or unreliable access to electricity, no education or healthcare. Companies that focus on the Westernised metropolitan segment of the market, and simply offer cheaper, defeatured versions of their products to the emerging demographic below, are missing a trick. The World Bank’s Next Four Billion report in 2008 estimated that those outside the formal economy represent a $5tn untapped market, and it’s likely double that today.

Jaideep says there are six principles to Jugaad: It sees opportunity in adversity; it does more with less; it thinks and acts flexibly (“if you can’t climb the mountain you find a way around it”); it keeps things simple; it includes the margins; it follows its heart (“if you’re passionate about what you’re doing you’ll have the grit to keep at it”)

Take Harish Hande’s SELCO — which had the problem of how you sell solar solutions for rural electricity into rural areas where people can’t afford the upfront capital expense. He was told by a village fruit vendor that 300 rupees a month was unaffordable, but 10 rupees a day could be managed. HIs solution was to train a local to manage batteries. The bank gives that guy a loan to buy the kit; he charges batteries in the day and rents them to customers in the evening. After six months he has a credit history and a foothold in the formal economy. And his customers have light they can afford.

The key is, just like Hande, to adapt to conditions on the ground. Nokia, for instance, used ethnographers to discover how rural Indians used mobile phones. They discovered that they typically wrapped them in plastic to protect them from dust, and that they used the screenglow as a source of light in the evening. The Nokia 1100 — with a flashlight and sealed keyboard — was the result and became the world’s bestselling mobile phone.

Mobile phones are a finance solution in Kenya. M-Pesa means that a son working in Nairobi can send his mother money in her village through her phone, which becomes like a debit card. She can cash the money in in the local corner shop, which acts as an agent. So you don’t have to open bank branches in villages: the corner shop is already there. 25 million Kenyans now use this system and its (tiny) transactions account for 50 per cent of GDP.

This style of doing things doesn’t just apply to the developing world. The “asset-light” sharing economy is able to scale very rapidly using existing resources: if Marriott wants to add 10,000 hotel rooms it has to build new hotels; AirBnB only has to get more renters to click on its platform. It’s using things that are already there. We’re in an age of “Prosumers”: not passive customers but consumers who actively shape the economy.

And the Maker Movement allows smart students to do things that previously only the R & D departments of major corporations were capable of. They can design and build in shared spaces (Fab Labs or tech shops) with rental access to 3-D printers; they can crowdsource funds; they can advertise virally through social media, and they can outsource distribution to larger companies.

We can all do more with less. And it’s not just good for the planet and our fellow man: it pays to do so.

1) Adapt your solutions to the conditions on the ground.

2) Bring in the margins: there’s a huge market outside the supersaturated conventional economy.

3) There are benefits for both large AND small companies in embracing the jugaad way of doing things — and they can use each-other’s complementary strengths.